How often does communication break down because you can’t understand a word that someone is trying to say? If you have ever (as both a language learner and as an instructor) had a miscommunication over a single word, you know the frustration of not pronouncing something correctly. This is not only frustrating but can also be embarrassing when you are trying multiple times to say a word correctly, or when as a listener you respond incorrectly because you heard the wrong word.

Part of learning new vocabulary includes how to pronounce words correctly. One of the most important pieces of this in English is related to syllable stress. Many times I have students in my academic language classes who might be familiar with a word when they read it, but when they say it out loud, it is challenging to understand them. Often, this is because they are not using the correct syllable stress for the word.

Good pronunciation resources can explain what syllable stress is and some of the common stress patterns in English words and word forms. As a general explanation, “stress” means the part of the word that is loudest, longest, and clearest. But often, learning and teaching these patterns might not be practical or possible within the constraints of the class or learning scenario. My approach in some of my communications classes is to teach a “cheat sheet,” which includes pronunciation resources and how to learn syllable stress for new words in your vocabulary lists.

The first key skill is becoming comfortable navigating an English-English dictionary that is written for English language learners. These dictionaries not only include easy-to-understand definitions and examples of words, but they are also a great resource for pronunciation and grammar.

My two favorite dictionaries these days are Longman Dictionary of Contemporary English Online and Oxford Learner’s Dictionaries. Both have similar information, but using them both at the same time might be helpful as they have a few nuanced differences.

Let’s take a word from the Academic Word List, inevitable, and see some of the helpful pronunciation resources that can help you learn how to correctly say a new word like this.

Listen to the word. Both dictionaries have a link to a recording of someone saying the word. You can choose from American or British pronunciations (which makes a difference, so choose your context!) – just click the speaker icon. Hearing a native speaker pronounce the word with correct syllable stress is the first step to saying it correctly.

Learn how many syllables are in the word. The Longman Dictionary breaks the word into its syllables. It does this by separating the syllables with a dot. So as you can see below, inevitable has 5 syllables: 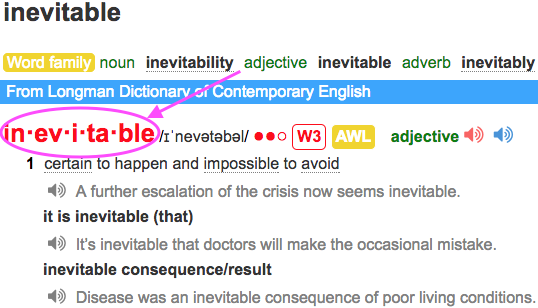 Learn which syllable gets the most stress, and which are unstressed. This one is trickier to learn because different dictionaries might use different symbols for this information. Also, the pronunciation information includes technical symbols that are related to the IPA, or International Phonetic Alphabet. Although knowing a couple of these symbols might be helpful for learners, I don’t think they have to know these symbols in order to learn which syllable is stressed. The key is looking for two punctuation symbols:

For the word inevitable, the second syllable gets the most stress. It sounds like this: in·EV·i·ta·ble – the “ev” sound is louder, longer, clearer, and higher in pitch (your voice goes up). The dictionary shows that the second syllable is stressed by using the vertical line before it: inˈevitable.

If you look up the noun form, inevitability, you will see that the syllable stress changes. This 7-syllable (!) word has both primary and secondary stress:

Understand what two pronunciation syllables mean. There are two symbols that get used in dictionaries that are the opposite of stress — they show unstressed syllables. This means that they are quieter, shorter, and less clear in pronunciation. Also, your voice goes down in pitch. The two symbols are ə and ɪ. The ə symbol means that the vowel sounds like “uh.” The ɪ symbol means the vowel sounds like the short “i” sound (like in the word sit). You will see these symbols used in the pronunciation tool in dictionaries. The most helpful thing to know is that these indicate syllables that are NOT stressed in the word. They are said less clearly than the stressed syllables.

Questions or comments about using these tools and strategies?  Please share your ideas.

Erica Harris is a core instructor for the Academic English Studies Program at Lewis & Clark in Portland, Oregon.

One thought on “Improve Pronunciation: The Importance of Stress”

This site uses Akismet to reduce spam. Learn how your comment data is processed.